In Ashland, an old Shakespearean tale is seen through an Asian lens 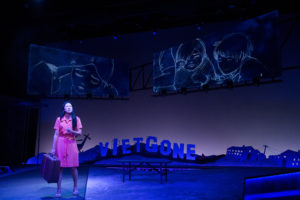 Audiences in Ashland are used to seeing casts of color in Oregon Shakespeare Festival productions. They’ve seen “A Comedy of Errors” set in Harlem, “Romeo and Juliet” in old California and “Troilus and Cressida” in the Middle East.

But this season, the 81-year-old festival is doing somethingit has never done before: produce a Shakespeare play through an Asian lens. What’s more, the festival is pairing “The Winter’s Tale” with a contemporary “sex comedy” about Vietnam refugees, written by a Vietnamese-American man.  Asian-American women are directing bothproductions.

“The festival has a great responsibilty to tell as many different stories as possible,” says Bill Rauch, artistic director. “The Asian-American community is the largest percentage of people of color in our adult audience. Through this cultural lens, we want to shed light on that culture.”

In “Vietgone,” playwright Qui Nguyen tells the story of how his parents left Saigon and met in a 1975 refugee camp in Arkansas. The story is both poignant and funny, he says. “I call it a sex comedy about my parents.”

“It knocked my socks off,” Rauch says, after reading the script. “After the LBJ plays we did (Robert Schenkkan’s “All the Way” and “The Great Society”), to learn about war from the perspective of Vietnamese war refugees in this country will be revelatory for audiences.”

Nguyen (“She Kills Monsters”) is known for using pop culture references in his “culturally savvy” comedies (The New York Times). For “Vietgone,” he writes a “weird pop culture version” of a 1975 story, using the slang and hiphop language he grew up with.

“I always wanted to write a story about my parents,” Nguyen says in a YouTube interview. But most most stories about Vietnam come from American soldiers’ perspectives. Think “Platoon,” “Apocalypse Now” and “Full Metal Jacket.” Instead, Nguyen wanted to tell the stories he grew up hearing.

“It was a tumultuous experience for immigrants,” he says. “They don’t like telling their stories. They’re painful.”

For “The Winter’s Tale,” director Desdemona Chiang sets Shakespeare’s late romance in dynastic China and the American Wild West. Playing off the cultures of East and West, the story of kings, queens, jealousy, death, exile, forgiveness and reconciliation is “intuitively a nice fit through an Asian lens,” she says.

What does the festival achieve with an Asian pairing?

“For me,” Chiang says, “to have a sense of ownership of the material is a very validating thing. This production is a sign of solidarity, a signof support.”

The pairing also coincides with a national conference of Asian American actors and theater companies to be held in Ashland in October, 2016.The Oregon Shakespeare Festival is the first non-Asian theater company to host the biennial conference, Rauch says.

He didn’t pair “Vietgone” and “Winter’s Tale” because of any thematic connection, he says. But he’s eager to discover how they relate. “Our audiences always teach me about connections between plays.”

“We have the voice of a young, vibrant Asian American and a beloved Shakespeare romance. It’s going to be fascinating how they talk to each other.”