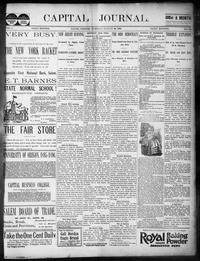 This year’s award winner of the annual ACRL (Association of College and Research Libraries) is the University of Oregon Libraries’ Oregon Digital Newspaper Program (ODNP). ODNP is recognized for the program’s positive impact on Oregon libraries and residents in digitizing historic Oregon newspaper content and making it freely available to the public through a keyword-searchable database.

The ODNP resource, offers users access to more than 180,000 pages of content from 31 Oregon newspapers dating from 1846 to 1922. Samples of historical research by public users include such varied topics as the 1905 World’s Fair in Portland, Hawaiians in Oregon, bicycling, tattoos, salmon, and even peanut butter can be found on the ODNP blog.

ACRL-Oregon commends this team for their initiative in pursuing grant money to assist in funding the project and their commitment to making searchable historic content more widely accessible.ODNP is funded through a combination of grants from the Library Services & Technology Act (LSTA), the National Endowment for the Humanities, the Oregon Cultural Trust, and the Oregon Newspaper Publishers Association.

Karen Estlund, Associate Professor and Head of Digital Library Services at the University of Oregon, will accept the award on behalf of the team at the ACRL Oregon & Washington Joint Fall Conference 2011.The project database is available now in beta form (http://oregonnews.uoregon.edu/)

The annual ACRL-Oregon Award for Excellence recognizes an individual or group who achieves excellence in the field by significantly improving Oregon academic libraries or librarianship.

Think you know someone that deserves recognition? Send in a submission next year for the 2012 award!