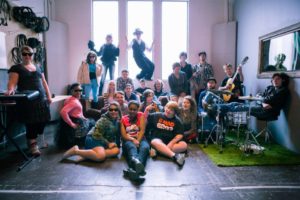 Participants in a My Voice Music workshop gather for a group photo.

Salem, Ore. – Oregonians invested more than $4.55 million in the Oregon Cultural Trust in 2016, topping the $4.5 million mark for the second straight year. The funds will support cultural organizations across the state.

“It’s another exciting year for the Cultural Trust as our visibility and impact in communities across the state continues to grow,” said Carole Morse, chair of the Cultural Trust Board of Directors. “We appreciate our donors making culture a priority during a very eventful year.”

The total includes $395,787 raised through the Willamette Week Give!Guide, an 11 percent increase over 2015. It also includes an increase in corporate giving, including donations from Intel employees and a subsequent matching gift from the company totaling $38,575, and continued online giving growth.

The donation total for 2016 comes within a few thousand dollars, less than half of one percent, of matching record fundraising results for 2015.

More than half of the money raised will be distributed directly to Oregon’s cultural groups this summer; the remainder will grow the Cultural Trust permanent fund. Cultural Trust grants are distributed through five Statewide Cultural Partners – Oregon Arts Commission, Oregon Heritage, Oregon Historical Society, Oregon Humanities and the Oregon State Office of Historic Preservation – as well as to 45 county/tribal coalitions and directly to cultural nonprofits via Cultural Development Grants.

The more than 100 projects supported by the Cultural Trust in 2017 include: