Give by June 30 to increase FY2018 grant funding 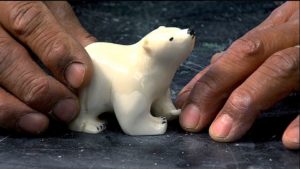 Inupiat artist Dick Weyiouanna and his beautiful Polar Bear figurines were featured in the People of the Whale film as part of the Alaskan Native Wisdom section of Wisdom of the Elders’ Native Wisdom Film Festival. The festival was supported by a grant from the Cultural Trust.

While the vast majority of donations to the Cultural Trust come in near the end of the calendar year, it’s those who give in the first six months who have an immediate impact on funding to the field.