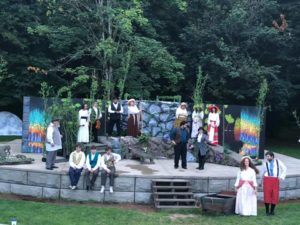 A scene From Keizer Homegrown Theatre’s summer 2019 production of William Shakespeare’s “As You Like It.”

Salem, Ore. – Generous Oregonians ensured an increased investment in Oregon’s cultural community for FY2021 by donating $4.58 million to the Oregon Cultural Trust in 2019. The funds represent a 1.2 percent increase over 2018 and will support grant awards to cultural organizations across the state this summer.

“We were working with a reduced budget for the fall campaign, so we focused more time and energy on grassroots outreach and conversations with cultural patrons,” said Cultural Trust Executive Director Brian Rogers. “The fact that we experienced an increase in fundraising results speaks to the power of one-on-one networking.”

“We are grateful for the generosity of our donors and their commitment to protecting our state’s arts, history, heritage, preservation and humanities,” said Cultural Trust Board Chair Chuck Sams. “By participating in Oregon’s unique cultural tax credit, they have strengthened cultural programs and projects in every county of the state.”

The $4.58 million fundraising total includes 9,470 donations, a 7.1 percent increase over 2018, and 1,736 new donors. It also includes a record $442,815 raised through an ongoing partnership with the Willamette Week Give!Guide.

“Our partnership with Give!Guide is one of the cornerstones of our campaign,” said Rogers. “It is a great way for people to learn about the Cultural Trust and the tax credit, bringing in 658 new donor households this year alone.”

Contracted partners for the Cultural Trust campaign are Bell+Funk of Eugene and Artslandia of Portland. “We couldn’t ask for a more passionate, creative and committed team,” said Rogers.

More than half of the money raised will be distributed directly to Oregon’s nonprofit cultural community this summer; the remainder will grow the Cultural Trust permanent fund. Cultural Trust grants are distributed through five Statewide Cultural Partners – Oregon Arts Commission, Oregon Heritage, Oregon Historical Society, Oregon Humanities and the Oregon State Office of Historic Preservation – as well as to 45 county/tribal coalitions and directly to cultural nonprofits via Cultural Development Grants.

The 89 projects supported by Cultural Development Grants in FY2020 include:

For a full list of Cultural Trust grant projects, including links to Cultural County Coalitions and several hundred county projects they are funding this year, visit www.culturaltrust.org.