The Oregon Poet Laureate fosters the art of poetry, encourages literacy and learning, addresses central issues relating to humanities and heritage, and reflects on public life in Oregon. The Poet Laureate provides at least six and up to 20 public readings per year in settings across the state to educate community, business and state leaders about the value and importance of poetry and creative expression.

Stafford began a two-year term as Poet Laureate in May, succeeding Woody, who had served as Poet Laureate sinceApril 2016. Both are committed to connecting communities through poetry. Each will read from their personal collections at the event and invite youth from the center to share their original works of spoken word. Sarah Calvin-Stupfel, Oregon’s 2018 Poetry Out Loud champion, also will be featured.

“There are many ways to serve this state and among them is clarity of language and passion of purpose, which may travel from one soul to another through poetry,” said Governor Kate Brown, who appoints the Poet Laureate. “Kim Stafford is one of our state’s most generous literary teachers and I am proud to appoint him as our next Poet Laureate.”

Stafford was born and grew up in Oregon. He is the author of a dozen books of poetry and prose, and edited half a dozen others. His book, “Having Everything Right: Essays of Place,” won a citation for excellence from the Western States Book Awards in 1986. Stafford has received creative writing fellowships from the National Endowment for the Arts, a Governor’s Arts Award, and the Steward Holbrook Award from Literary Arts for his contributions to Oregon’s literary culture. His work also has been featured on National Public Radio.

“Elizabeth Woody’s words bring to life the landscapes, creatures and people who make Oregon special,” Governor Brown added. “As Poet Laureate, the energy of her vivid storytelling helped us understand who we are as a larger community.” 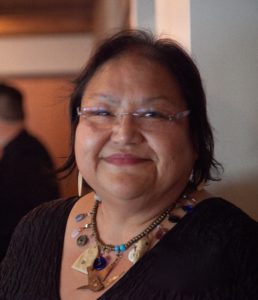 Woody was born on the Navajo Nation reservation in Ganado, Arizona, but has made her home in Oregon for most of her life. An enrolled member of the Confederated Tribes of Warm Springs, she has published poetry, short fiction and essays, and also is a visual artist. “Hand Into Stone,” her first book of poetry, received a 1990 American Book Award. In 1994 she published “Luminaries of the Humble (University of Arizona Press)” and “Seven Hands, Seven Hearts (The Eighth Mountain Press).”

To learn more about the Oregon Poet Laureate program, or to schedule an event with Kim Stafford, visit the Poet Laureate website.

The Cultural Trust extends its gratitude to the Boys & Girls Clubs of Portland Metro and the City of Gresham for their generous support of this event.

About the Oregon Cultural Trust

The Oregon Cultural Trust is an innovative, statewide private-public program raising significant new funds to support and protect Oregon’s arts, humanities and heritage. In addition to the creation of a permanent endowment, funds are distributed annually through three multifaceted, wide-ranging grant programs. No other state in the nation has a program like the Oregon Cultural Trust, which has been ranked with the bottle bill and the vote-by-mail bill as among Oregon’s most forward-thinking public policy measures. More information at culturaltrust.org.

Oregon Humanities is an independent, nonprofit affiliate of the National Endowment for the Humanities and a statewide partner of the Oregon Cultural Trust. Each year through programs and publications—the Conversation Project, Think & Drink, Humanity in Perspective, Bridging Oregon, Public Program Grants, and Oregon Humanities magazine—Oregon Humanities connects Oregonians to ideas that change lives and transform communities. More information at oregonhumanities.org.