Oregon’s little theater that could… and does!

A script for self-reliance, a bit of frontier spirit and some pluck… that’s the scenario for success at Little Theatre on the Bay in North Bend, Oregon.

While its name may conjure a quaint small-town arts group, Oregon’s second longest-running theater company boasts recent achievements to rival much larger, professional theaters. All accomplished by a wholly volunteer team and supported by the Oregon Cultural Trust. They’re as independent as the settlers before them, and that’s the spirit that has propelled the Little Theatre on the Bay to its successes today.

There was a time in history when the stage went dark, but in the 1940s Little Theatre on the Bay began its journey back and these days it’s “Boy Howdy!” 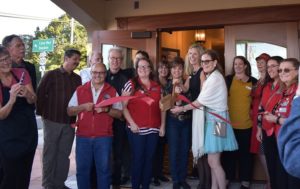 The grand reopening ceremony for Little Theatre on the Bay’s renovated lobby.

Eight phases of changes have helped propel the Little Theatre into local fame through news releases, media stories and excitement in the local community. Jeanne Woods, vice president of the Little Theatre board, is particularly proud of one statistic. Before the renovations were made annual ticket sales to Little Theatre performances totaled 5,674. After the changes to the building (pre-COVID), that number climbed to 11,543.

Even now the offerings are continuing to increase with a new junior musical program, which stars boys and girls as young as 8 years of age in the performing arts.  “There’s a symbiosis between local schools and the Theatre,” says Ms. Woods. “We support the schools and they support us.”

Board President Aymee Pedder says “The junior musical program came on quickly due to the Cultural Trust’s belief in us.” She adds, “The youth aspect is vitally important to us…because the young people were not getting the kind of exposure to the arts in school as we would like…and now we are making that offering.”

Interestingly, since 2015 some 650 unique donors have provided funds to the Little Theatre…some more than once. “The grants have given us credibility,” says Woods, “and now local citizens see the results of their donations showing up in the local community. It’s exhilarating.”

The spotlight of success at the Little Theatre on the Bay arises from a community that had been bypassed for years by traditional performers who traveled from San Francisco to Portland via air, sea or freeway.  Now, it’s a local community fulfilling local needs and locals are responding.  Their triumphs are due to volunteer board members, costumers, set designers, lighting specialists…all from the local communities in Coos County. Says Woods, “We’ve brought all these creative spirits together and it enriches our table.”