A graduate of Yale and the Iowa Writers Workshop, Peter Sears taught at Reed College in Portland, Oregon, and served as Dean of Students at Bard College, community services coordinator for the Oregon Arts Commission, and director of the Oregon Literary Coalition. He resided in Corvallis, Oregon.

His poems appeared in dozens of literary and popular publications, including the New York Times, the Atlantic, Field, and Rolling Stone, and he published eight collections and chapbooks. Working in a range of forms and styles, from formal to free verse and from nonlinear expressionism to more speaker-centered narration, Sears wrote poetry that is both whimsical and earnest, playful and deadly serious about the challenges of human existence. Poet David Biespiel called Sears a “surveyor of everyday spots of time, a Wordsworthian with an American accent…a Western dark humorist.”

Sears is the author of three full-length poetry collections — Tour: New and Selected Poems, The Brink, and Green Diver, a number of poetry chapbooks, and books on teaching writing, including Secret Writing, and I’m Gonna Bake Me a Rainbow Poem.

Sears served as Oregon Poet Laureate from 2014 to 2016, making more than sixty public appearances in communities all over Oregon. He was the state’s seventh poet laureate and the third writer to hold the position since it was revived in 2006. During his tenure, he focused on what he called “expanding voices,” often sharing the stage with poets working in languages other than English. He passed away on July 20, 2017, in Corvallis, Oregon.

A short documentary about Peter Sears and Peter Sears reading his poem “Bad Day”. Videos produced by Sika Stanton for Oregon Humanities and the Oregon Cultural Trust in 2015. 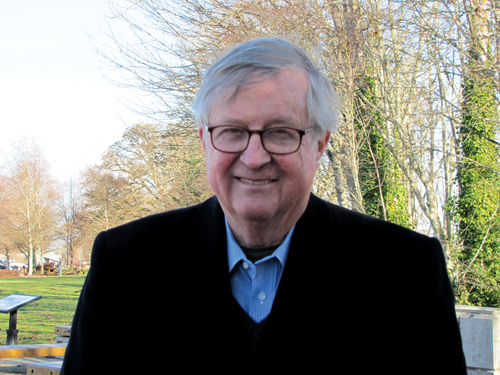