Illuminating Joseph County’s Nez Perce heritage is the focus of a “Head and Heart” exhibition being developed by the Josephy Center for Arts and Culture, supported by a grant award from the Oregon Cultural Trust. Richard Wandshneider, the director of the Josephy Center Library, is leading the project.

“What has really struck us over the past two months is how much the topography has changed with settlement,” says Wandschneider, referring to the arrival of European people in the region.

Wandschneider cites Wallowa Lake as one example of how the area has changed dramatically. Ancient glaciers formed the lake, which once spilled across the valley in a series of interwoven river channels creating an ideal habitat for birds, sock-eye salmon and beavers.

The valley “was like an oasis,” says Kolle Kahle Riggs, a library assistant at the Josephy Center, until the construction of the Wallowa Lake Dam dried up the surrounding area in 1916. The remaining streams were bulldozed into a single river, which was better for farm irrigation.

The beavers and sock-eye salmon are now (mostly) gone, but for the past several months Wandschneider and Kahle Riggs have been working to put the lost oasis back on the map. 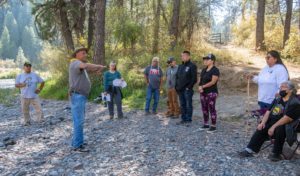 Their research has brought together an array of geologists, botanists and Nez Perce tribal elders to conduct a study of the land. Pairing science alongside oral history, their fieldwork ranges from locating old spearfishing sites, to collecting plants like dogbane, which the Nez Perce used traditionally to make rope, string and nets.

“Head and Heart” is scheduled to open in October of 2023, and will feature at least two maps of the region—a pre-European version as well as one of today—and filmed interviews with both tribal elders and scientists. The “counter-maps,” Wandschneider says, will not just reiterate geographical borders, “but be functional to Indian stories.”

The exhibit will also showcase key plants of the region, which Kahle Riggs says was once “tended like a garden.” Plaques will be rendered in both English and a few of the many Nez Perce dialects.

Although the October exhibit is still a ways off, Wandshneider and Kahle Riggs already hope to promote their research with elders and scientists long after.

“The project could go on forever,” says Wandshneider. “What we’ve discovered is the relationship between language and place.”

“You open one door and there are three other doors behind it.”